What unit size is right for you?

Watch our size guide videos to choose the right unit

Find Storage Near You

We want you to feel comfortable trusting us with your asset management. To get to know us better, read about the individual members of our team below. 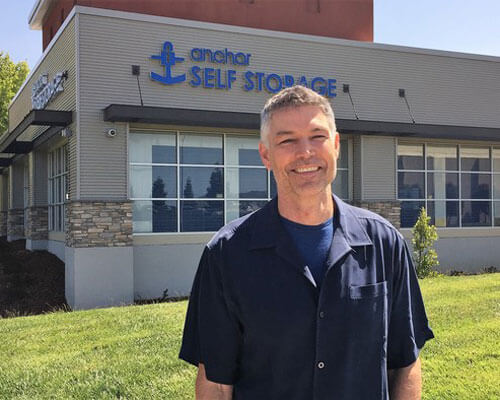 Prior to starting Cubix Storage and Veneto West in 2006, George served as Chairman and Chief Executive Officer of Intera Group Inc., the company he co-founded with Sean Venezia in 1987. In February 1997, GTCR acquired Intera as a platform company to consolidate and grow public telecommunications companies. GTCR capitalized Intera with $115 million of debt and equity used to acquire over 50 regional communications companies. Intera, with over 200 employees and 10,000 customers, generated annual revenues exceeding $50 million and EBITDA of $15 million. George served on the boards of directors of his industry’s Federal and California State trade associations. In addition to self-storage, George has been involved with the ownership and development of office, light industrial, multi-family and residential properties. George, earned a Bachelor’s degree in Business Administration from the Haas School of Business at the University of California-Berkeley in 1985, has been married to his wife Michele since 1986 and has four daughters. On weekends, you might find George surfing, mountain biking or snow skiing. 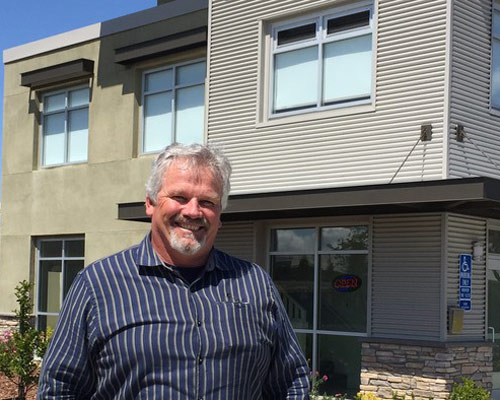 Prior to starting Cubix Storage and Veneto West, Sean served as Chief Financial Officer of Intera Group Inc., the company he co-founded with George in 1987. In February 1997, GTCR acquired Intera as a platform company to consolidate and grow public telecommunications companies. GTCR capitalized Intera with $115 million debt and equity used to acquire over 50 regional communications companies. Intera, with over 200 employees and 10,000 customers, generated annual revenues exceeding $50 million and EBITDA of $15 million. Sean served on the boards of directors of his industry’s Federal and California State trade associations. In addition to self-storage, Sean has been involved with the ownership and development of light industrial and residential properties. Sean earned a Bachelor’s degree in Finance from Santa Clara University in 1983, has been married to his wife Kappy since 1990 and is the father of two daughters and a son. Sean played college baseball at Santa Clara, was the starting 3rd baseman for the Western Province Springbok national championship baseball team in South Africa in 1984, captained his 4.5 USTA Men’s Tennis team to the national championships in 2006, managed Tri-Valley Babe Ruth’s 13-year old all-star baseball team to a 3rd place finish in the 2012 Babe Ruth World Series and was awarded the Carnegie Hero Award for saving the life a high school student from a burning SUV in 2007. On weekends, you may find Sean playing tennis, snow skiing, mountain biking or hiking with his wife Kappy. 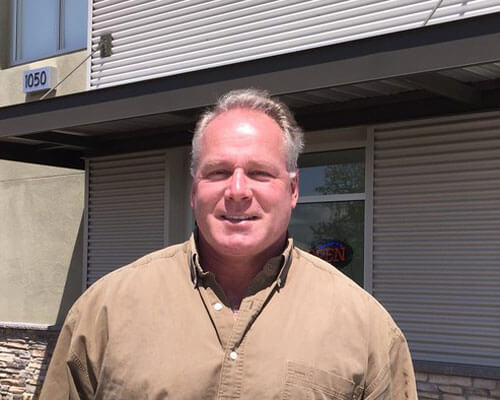 Ed Boersma is president of Cubix Construction, a private construction company based in Danville, CA, that has specialized in self-storage design and construction since the late 1970s with more than 20 million square feet of self-storage buildings completed. Cubix is Veneto West’s construction partner.

Cubix Construction was a pioneer in developing efficient, standardized construction practices for self-storage units. Ed earned a Bachelor’s degree in business and economics from Westmont College in 1985 before joining Cubix. He has two children and resides in Danville. On weekends, you may find Ed kitesurfing or surfing on a stand-up paddleboard. 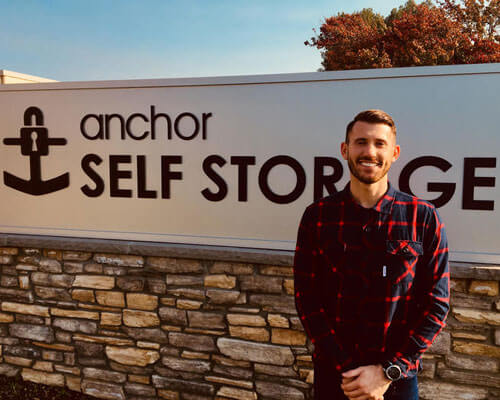 Prior to teaming up with Veneto West and Cubix Storage, Eric founded ITLO Equity, LLC, and served as Director of Acquisitions and Leasing for Sutter & Pierce EPC, LLC, both privately held opportunistic real estate investment companies focused on the development of single and multi-tenant net lease retail projects. Eric has extensive experience in commercial real estate finance, acquisition, disposition and development, with a specialized focus on sourcing and executing value-add developments from site selection to operation and exit sale.

A native of Columbus, Ohio, Eric is also a proud Godfather to two Nephews and holds a bachelor’s degree in Entrepreneurship from the University of Dayton. In his spare time Eric enjoys exploring new places and testing his physical limits, most recently finishing an IRONMAN 140.6 and backpacking through Patagonia and Northern Argentina. 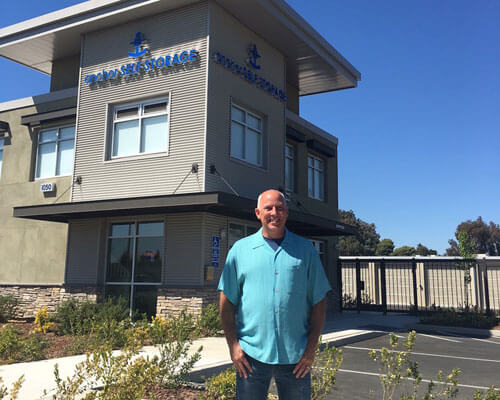 Kerry has more than 25 years of management experience within the telecommunications and route logistics industries. With a solid background in merger and acquisition integration, he is a versatile team leader with proven success in private industry and in the U.S. armed services.

Kerry is a former general manager with Arctic Express and Pacific Telemanagement Services and worked with George and Sean at Intera as both product manager and vice president of operations. Kerry is married with a son.

On weekends, you might find Kerry running trails or hiking with his son and dogs. 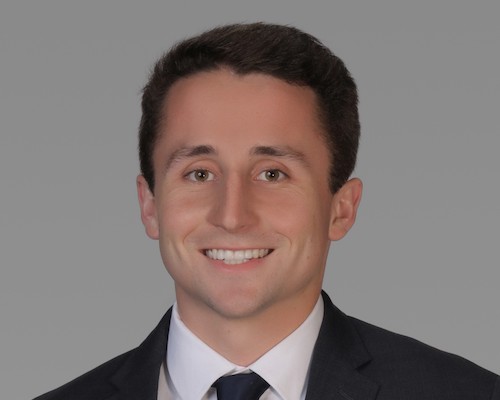 With a decade of experience in the self-storage industry, Logan brings a uniquely diverse set of skills to our Cubix Storage team. Prior to joining Cubix Storage, Logan spent time as a Design Draftsman and Project Manager with Cubix Construction, a self-storage design/build company involved in over 400 storage facilities, where he managed projects from the conceptual stage through Planning Department Entitlements, Building Department Permits, all the way through construction and Certificate of Occupancy. Logan expanded his toolkit with experience on the brokerage side at Colliers International, identifying land development opportunities and acquisition targets while working under nationwide leading self-storage broker Tom de Jong, who has completed transactions in excess of $450 million.

Logan’s character is molded by his passion to strive for improvement, living by the motto “ever-growing”, which is embodied by his goal-oriented personality. Logan spent his undergraduate years at Cal Poly, San Luis Obispo where he majored in Business Administration. As an outdoor enthusiast, Logan enjoys spending his free time mountain biking, golfing, surfing, camping, and hiking with his 2-year-old Golden Retriever, Champ. 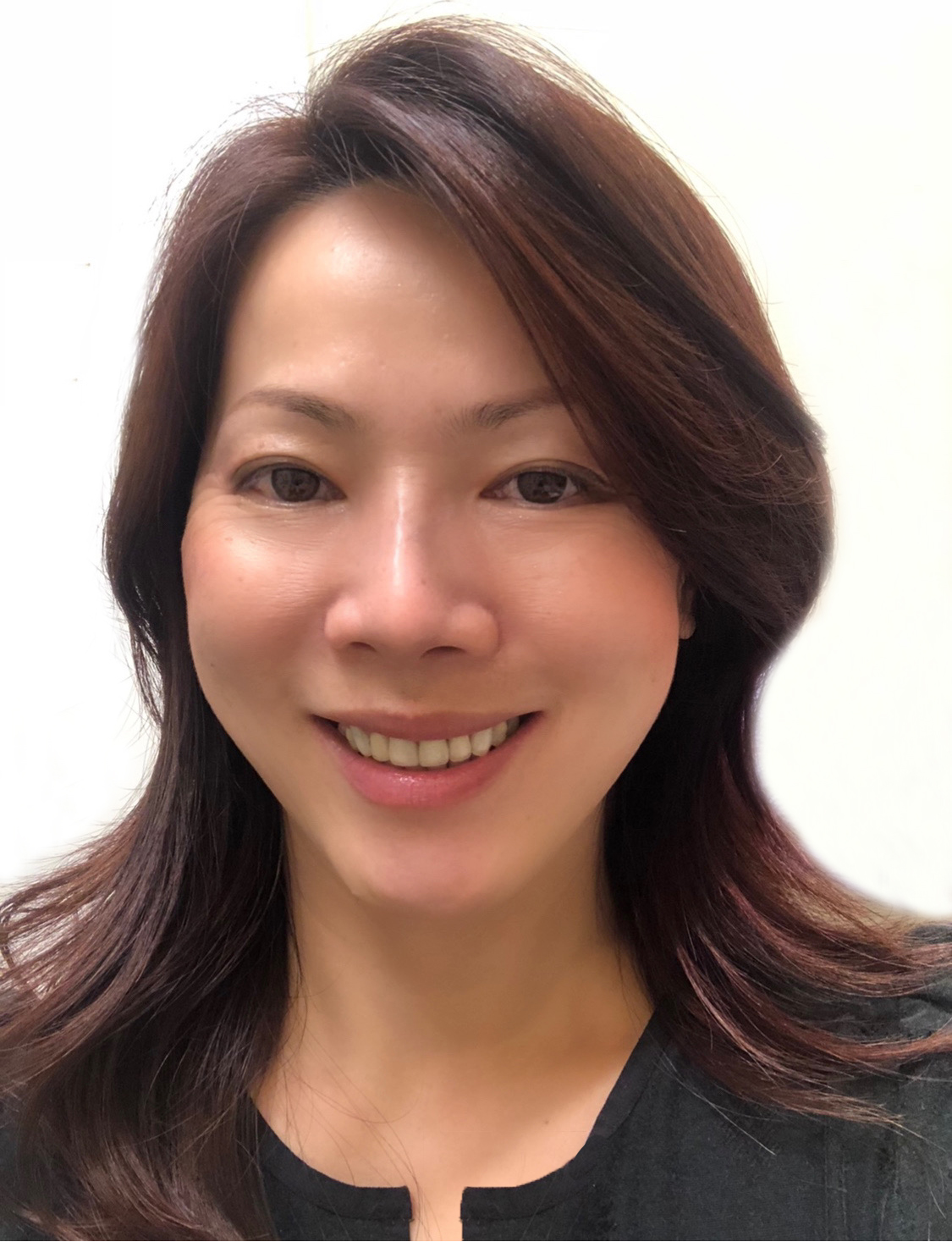 With more than 20 years of marketing, sales, and operations experience, Debbie Kuo is a solution-focused digital marketing executive in the telecom, biotech, eCommerce, media, and fintech industries. Debbie offers innovative voice and multi-channel marketing and sales strategies for the Fortune 500 companies like Bank of America and Prudential and has helped build a top medical device brand that had successfully launched IPO in 2020.

Debbie’s personal profile is shaped by strong community values, a superior work ethic, and an integrity-driven competitive nature that drivers her to exceed and motivates those around her. Debbie holds various licenses and degrees as proof of her thirst for knowledge and over-achieving nature. She has a master’s degree in Marketing from Emerson College. As a devoted leader, mentor of businesswomen, and volunteer, she values relationships, families, and thriving communities. Debbie, as a rabbit lover, also enjoys playing tennis, running half marathons, traveling, and jazz improvisation. 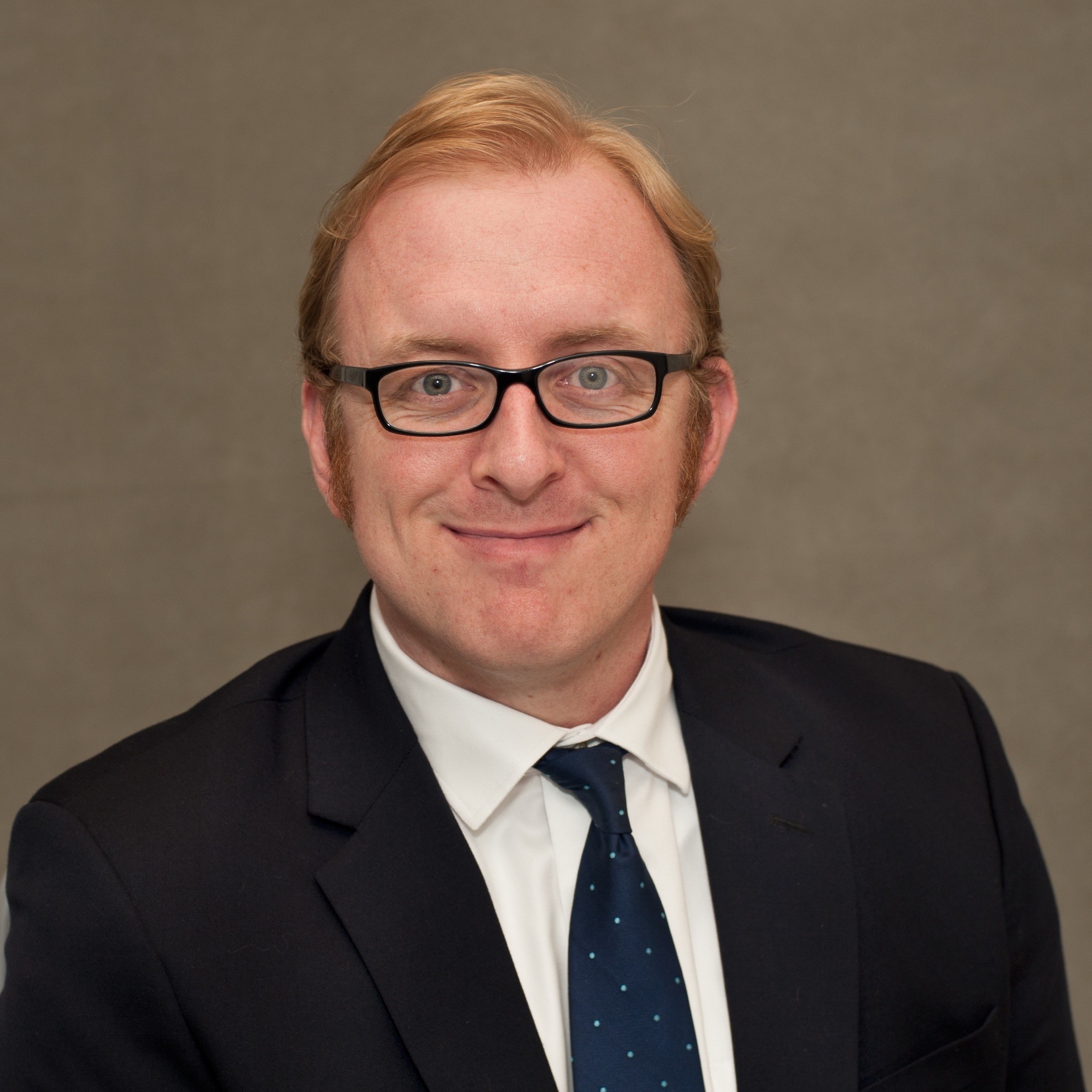 Bradd joined Cubix Storage as Controller in 2020 after nearly 15 years of experience in the accounting field.  Bradd’s diverse experience includes public accounting, external and internal audit, as well as running a full-service accounting shop at University of the Pacific’s Dugoni Dental School.  Bradd earned his CPA in 2009 and his MBA from California State University, Stanislaus in 2017.

In his spare time Bradd enjoys gardening, reading, movies, concerts or playing a competitive game of backgammon.  Bradd resides in the East Bay of San Francisco with his wife Bethany. 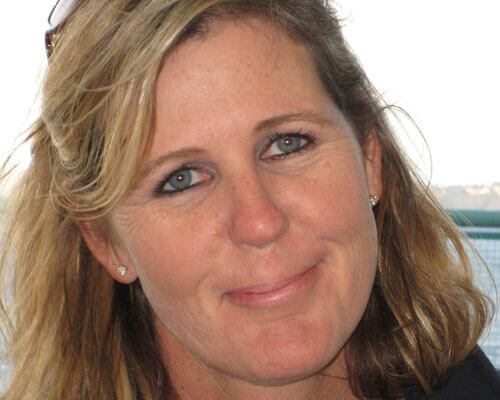 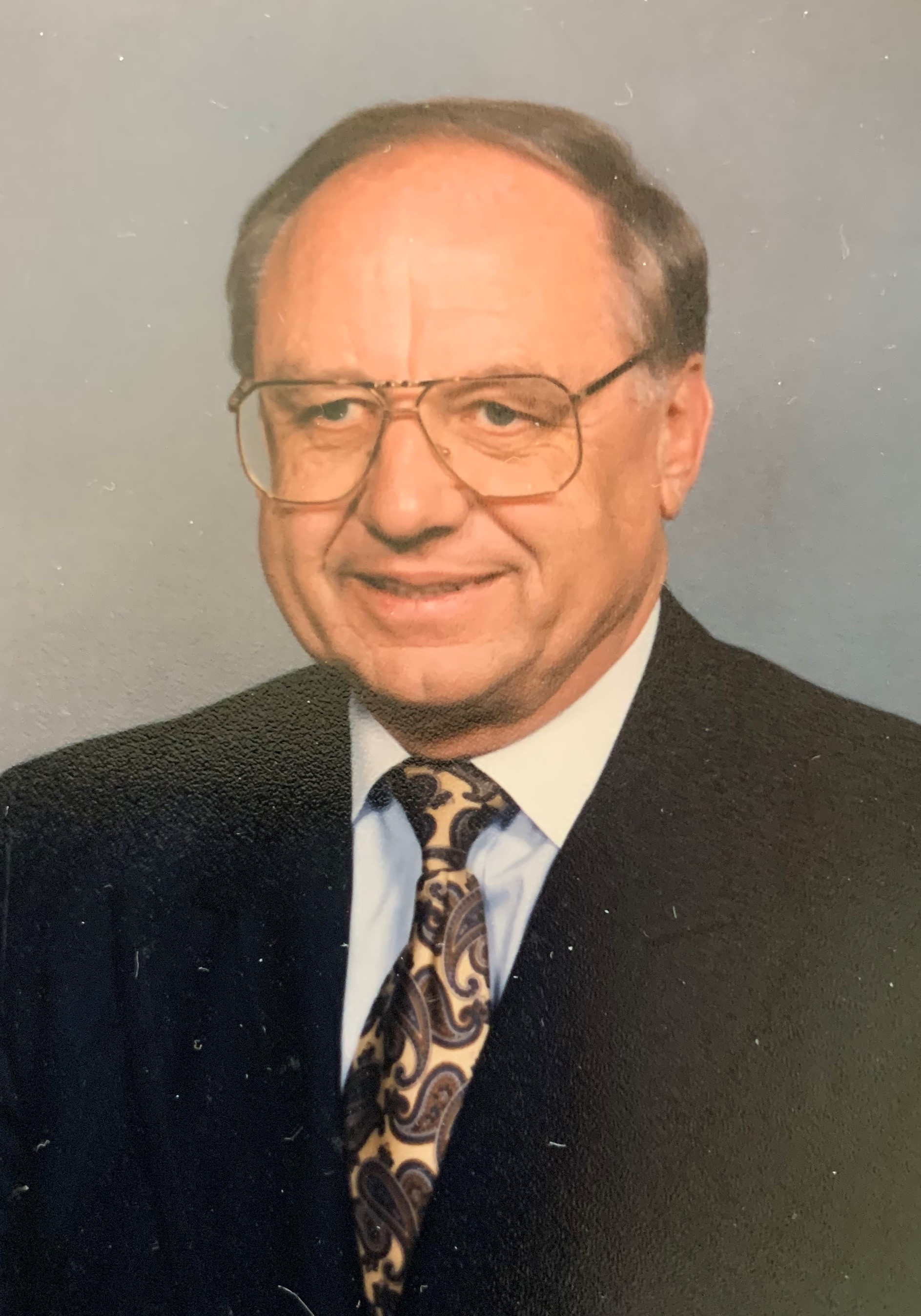 Cubix Construction Company’s roots in the design and construction business extend back to 1948.  Stanley Boersma, an immigrant from the Netherlands, joined the company in 1958 and rose through the ranks to become president in 1969.

In 1972 the Company built its first Self Storage facility for Kaiser Aetna in Pacheco, California.  After completing that project, Stan realized that standard construction methods were inefficient and costly for this type of use.  Under Stanley’s management, Cubix developed new design concepts and standardized construction systems that resulted in a higher quality product providing a competitive edge for the owner and greater security and access for the tenants.  The Cubix design, concept, and methods have become the model for the industry.

Stan’s son Ed, and grandson Logan, continue the family legacy as managing members of Cubix Storage.  Stan and wife Geurtje of almost 60 years have 13 grandchildren and have an active life spending time between homes in Alamo, CA and the Netherlands.